Above the Scorpion unfurls its tail across the delta’s width before the river crashes into the ocean. I’m enjoying a lone sail with the boatman along the mangrove-lined river with its dunes silhouetted against the night sky. Everything is elemental, pure and magical. As the stars sparkle above, the water is lit with phosphoresce.

This is heaven on earth.

I’m in the Tana Delta, Kenya’s largest delta that spans 130,000 hectares. It’s where the Tana, Kenya’s longest river meets the salt waters of the Indian Ocean after a journey of 800 kilometres from the heart of the country. When it reaches the coastal shores, the earth-filled river branches out into an estuary of magical maze.

And that’s what l’ve come to explore sailing from one end of the delta to the other.

Suitably my first stop is at Delta Dunes, a delicious hideout spread on the high sand dunes. As the sail ends, it’s a quiet walk up the sand hill to my private enclave that’s open to the delta. From the great heights, the delta is spread below and l sleep to the soothing sound of the elemental waters.

At dawn, l clamber over the dune and spread below is the world’s youngest ocean, the Indian. It still pops up with amazing creatures from the deep sea, washed ashore and so gigantic that it makes the mind boggle. Placed around the makuti  and driftwood paradise are the white-washed bones of a gigantic whale and her calf. “We saw them floating (unfortunately dead) on the water and didn’t know what they were till we sailed up to them,” tells Richard Corcoran of Delta Dunes.

A group of kayakers paddle through the narrow straits of the delta and it’s the start of another exciting day on the delta.

Day on the Delta

The floodplains are wet. To reach Delta Dunes means taking a boat from the jetty at the Lower Tana Delta Conservancy courtesy of the management. It’s an amazing arrival through the delta’s many channels. The next boat l’m catching belongs to the Ozi Community Conservation Area to sail downstream to Kipini on the other end of the delta with Mohamed Ghodana of Ozi as guide.

The heartbeat of any delta are the floods that replenish the surreal mosaic of palm and mangrove forests, savannah grasslands and ancient farms, mud flats and sand dunes, secret little ox-bow lakes and the wetlands.

And it’s this tapestry of so many different worlds that pulsates with life and we spend an exciting day watching out for gigantic hippos and eyeballs afloat the brown water giving the crocodile away. The piecing call of the African fish eagle fills the silence. Goliath herons, the largest on the planet stalk the muddy waters as storks, ducks, geese and the jewelled but tiny Malachite kingfishers land dainty on overhanging branches. Vivid red wings of the Carmine bee-eaters flit above the earth waters and the Orma herdsman ushers his cattle across the river to the core of the delta that is the last refuge for grazing during times of drought. It’s little wonder that the delta is an internationally recognized Important Bird and Biodiversity Area now called a Key Biodiversity Area.

At lunch, we hop off the boat to the Pokomo village at Ozi. The fishers rest, their narrow dugout canoes tied on the banks of the river. At the village little girls help their mothers pound the rice to separate the chaff from the grain while others weave the makeka from palm fronds. The older men challenge each other at the ancient game of bao while the youngsters gather around the pool table. We lunch on mandazis and tea at the kiosk and sail away along the Pokomo farms of coconut and betel nut, rice paddies edged by mango and banana trees to reach the famous Ozi forest that’s still the preserve of the buffaloes and elephants, the lion and more.

And then the river widens and the ocean comes into view. We’ve reached the village of Kipini once a stronghold of the Arabs until the British came in. Even today the century-old administration building stands though in ruins. There’s a Swahili wedding and we join in the late night festivities and return to Mama Lucy’s way past midnight. 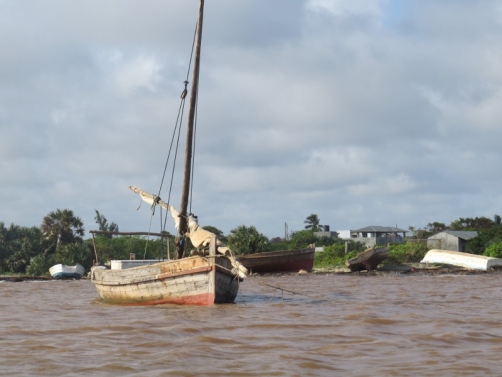 Easiest way from Nairobi is to fly to Malindi. It’s an hour’s drive from Malindi to Delta Dunes. Read on all the exciting excursions to get your money’s worth.

If you want to explore the delta, contact Nature Kenya who will arrange for the boat via its Site Support Group, Ozi Community Conservation Area. The guides know their birds and all. 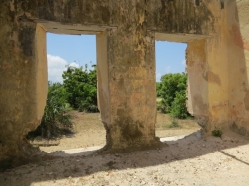 From Kipini you can drive on to Lamu, 50 kms north.