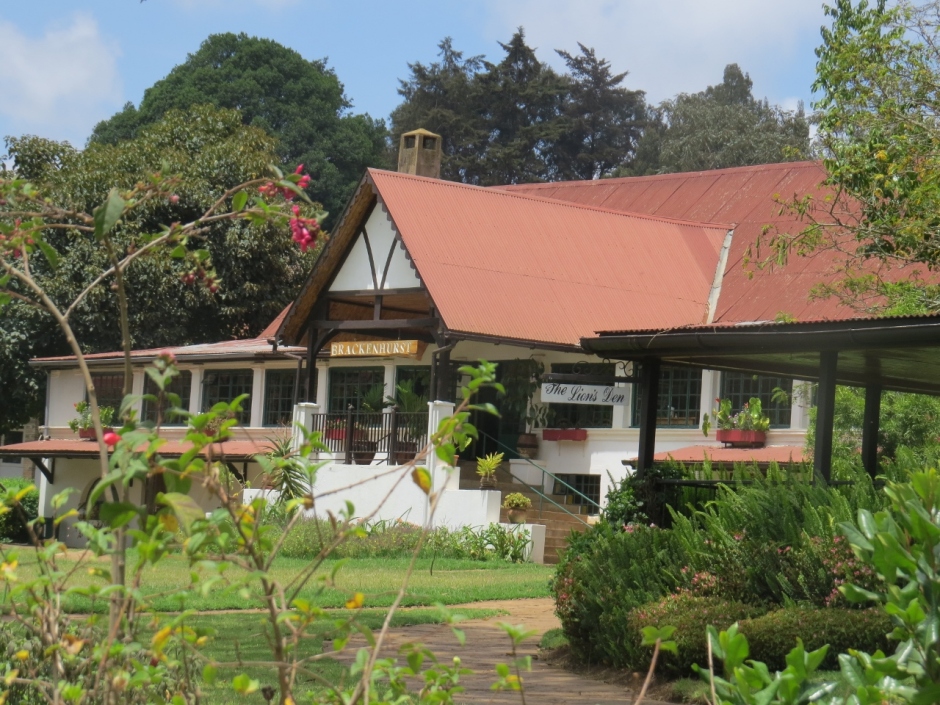 It’s popping with colour under the canvas of a gorgeous blue sky. Orange aloes in bloom attract an array of colourful sunbirds – Variable, Tacazze, Golden-winged and more. An African goshawk vanishes into the canopy of a tree and many more keep the birders glued skyward.

END_OF_DOCUMENT_TOKEN_TO_BE_REPLACED 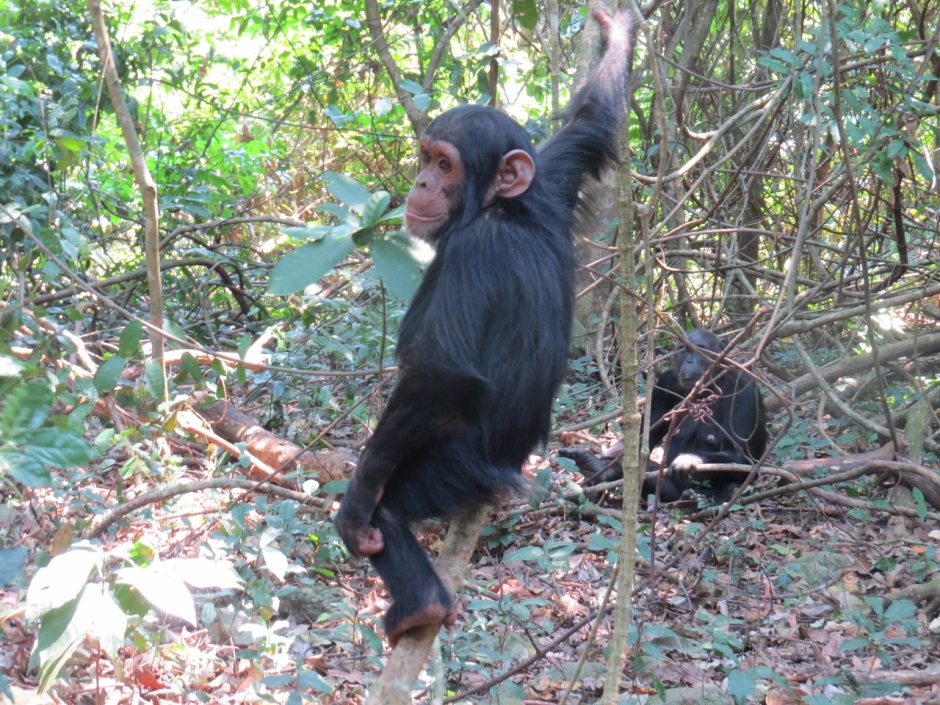 For the chimpanzees (sokwe mtu in Kiswahili)

When l heard Dr Jane Goodall talk in Nairobi about her ground-breaking pioneering chimpanzee research in Gombe it became my mission to get there in search of our closest relative whose DNA is 98 per cent like ours. It was Goodall who first documented chimpanzees using tools for a purpose – inserting sticks in a termite mound to fish out the insects for a snack – that made Louis Leakey the Kenyan paleoanthropologist quote famously, “Now we must redefine tool, redefine Man, or accept chimpanzees as humans” END_OF_DOCUMENT_TOKEN_TO_BE_REPLACED 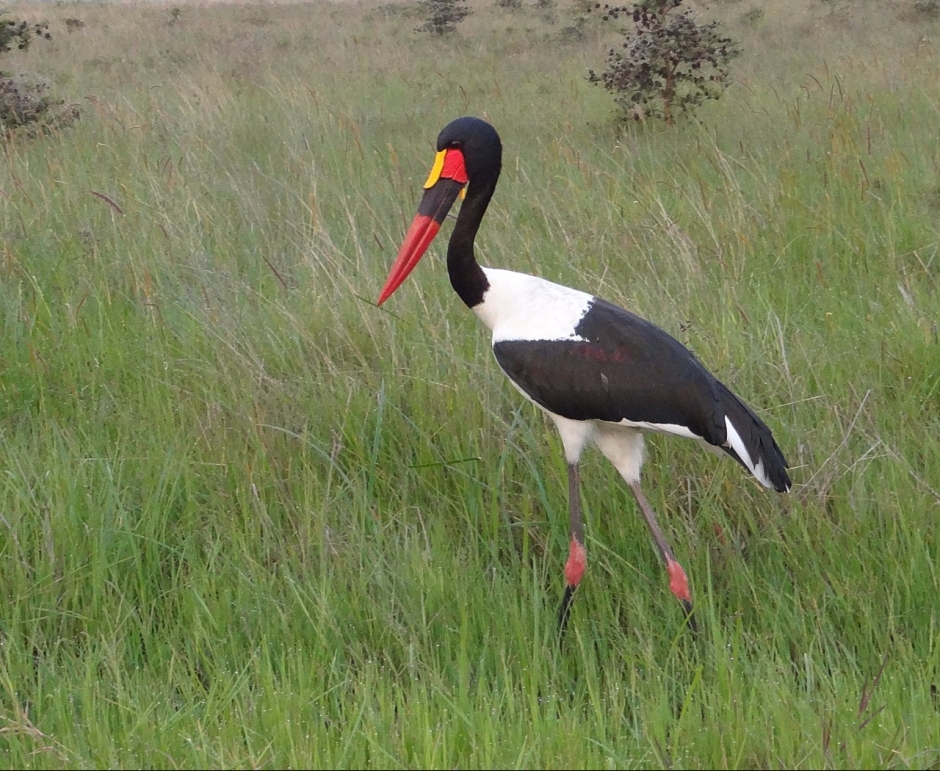 Nairobi is the birding capital of the world with more than 500 species recorded of the feathered kind. Few cities can rival that.

So when on a Wednesday morning it was announced that the Nature Kenya bird-walk would be in a swamp in the city, l was more than intrigued. I’ve long been fascinated by swamps (also called wetlands or vlei) because they are the heartbeat of the earth. Literally – these natural spaces sponge up the rain and floods and then store them in underground aquifers and release the water gradually to the surface for us to use.

They are also places of amazing diversity – of flora and fauna. So the reason for going to this little swamp in the city was in the hope of seeing one spectacular bird – the Saddlebill stork – which the birders had seen there before.

This beautiful stately bird is of the wetland and one of the tallest storks – around five feet with a wingspan wider than my height. It’s easy to identify – its massive bill is red with a black band with its signature yellow saddle – on the front of the bill.

Being a bird of the swamps, it’s no surprise that even the Ancient Egyptians had it in their hieroglyph. Egypt, Sudan and other countries along the Nile have since antiquity boasted of magnificent swamps like the great Sudd that holds one of the greatest migrations in the world – of the Uganda kob – akin to the Mara-Serengeti annual wildebeest migration across the vast savannah plains.

So in search of the Saddlebill, l arrived on a rainy August Wednesday morning at the Nairobi Museum car park for the bird-walk – something the amazing Fleur Ng’weno started on one fine morning in February 1971 and continuously being doing so – even on rainy days.

Donned in raincoats we made it to the swamp in the city – a tiny patch along Redhill Road that the resident’s association wants to keep intact – one of the reasons being that it’s important water storage.

A flock of Violet-backed starlings took to the sky, their amethyst backs not so iridescent under the cloud-filled sky. Nevertheless it was exciting because these amethyst-jewel coloured birds are always seen far above the ground.

“Before Redhill Road was upgraded it was easier for bushbuck and suni to cross from Karura forest to the swamp,” recalled Simon Johnson of Rosslyn Developments Ltd that has looked after the swamp since the estate was created in the early 50’s.

“The swamp has always been this size. It tends to stay flooded for longer these days probably because the old drainage across the Redhill Road towards Karura has been blocked by the upgraded roadworks. Mongooses and civet cats are sadly more often seen as road kill nowadays.”

Asked why the residents were so keen to save the swamp, Johnson replied “Since the houses rely on a borehole supply, a place for the rain to reach the aquifer was considered important. This was at a time was Rosslyn was still part of Kiambu and surrounded by coffee estates.

“Now that Rosslyn is surrounded by other residential and commercial developments that are part of the developing City, RDL treasures this open space even more. The fact that it is a natural wetland makes it even more special and we are in the process of making sure this natural wetland is kept intact.”

By now the skies opened and after an hour we decide to go birding in the bird gallery in the Nairobi museum.

It is in the museum as a child that l first became aware of the big wide world of birds – there are most of Kenya’s 1,100 species on display from the tiniest bee-eaters to the mighty African crowned eagle – one of Africa’s most powerful raptors in the gallery. It’s interesting to read the tags with descriptions from the days of ‘Kenya Colony’ – 1920 to independence in 1963.

Anyway – Kenya is a great staging post for the great bird migration that happens every year. Up to 5,000 million birds fly to Africa from the cold northern climes to sunny Africa in search of food and space. This amazing bird migration was first recorded in Tsavo West National Park at Ngulia Lodge in 1978 by accident – when the lodge lit its lights at night, the birds flew closer to earth and stunned the world.

Since then it’s become an annual event with bird lovers from all over the world perching at Ngulia to see this spectacle – with the story on display in the bird gallery.

Wandering through the aisles, many of these birds are facing troubled times as their spaces are encroached on – wetlands being wiped out, forests axed and grasslands cemented – because of our demands. Two of Kenya’s birds are already on the list – nearly extinct – unless we restore their forests high on the hills of the Taita. 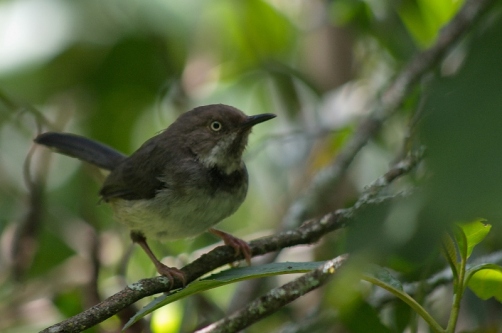 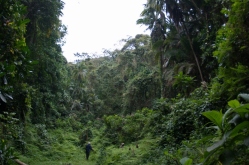 So join Nature Kenya http://naturekenya.org/ and learn about the wild and wonderful world we are part of!

“Three lionesses turned up one day from Nakuru National Park,” tells Kat Combes of Soysambu Conservancy that straddles Lake Elmenteita. It was in July 2014.

The trio were three years old looking for their own space. Two sisters settled in but the third returned to the park separated by a wire fence.

END_OF_DOCUMENT_TOKEN_TO_BE_REPLACED

We sail past a forest of the tallest mangrove trees that l’ve ever seen. Sparkling white sand bars appear in the low tide. It’s an endless blue planet from where we are when suddenly a dolphin slips in and out – too far to tell what species it is.

Towards midday Captain Lalli stops to refuel the tank and produces delicious, juicy mangoes – an impromptu picnic on the ocean.

Sailing on, he points to Faza, then Ndau – once powerful and independent sultanates on the island of Pate. We pass a Kenya Navy patrol dinghy and then get off at Mtangawanda, a tiny ‘port’ so named because it has black sand on its shores. 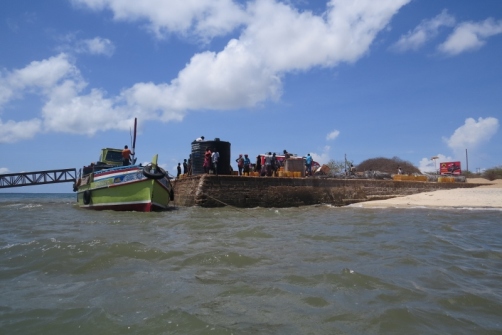 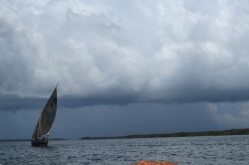 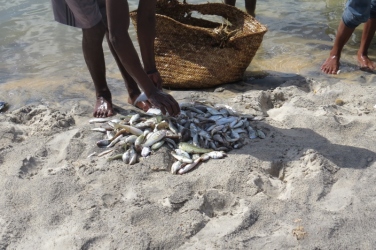