In the first light of dawn, the volcanoes of the Virunga Mountains line the skyline of Musanze, Rwanda’s second largest town in the north. The mountains share borders with Uganda and the Democratic Republic of Congo (DRC). It’s simply breath taking.

We’ve driven 100 kilometers out of Kigali, the capital at 5 a.m. to make it for the start of the trek into the forests of the volcanoes in search of the Mountain gorillas that the outside world first got to know of in the 20th century when the German explorer Captain Robert von Beringe saw them on the ridges of the volcanoes on 17th October 1902.

Hiring boots and rain coats at Volcanoes National Park in the tiny town of Kinigi, we listen intently to the gorilla ranger about the family we hopefully will meet in a few hours – it’s Amahoro meaning peace in Kinyarwanda.

And then the journey begins with a 45 minute drive up winding roads through rural farmlands on the slopes of the park. My heart skips a beat when the ranger points to the sky-scraping peak of the volcano we are to scale – but the lure of seeing a gorilla is great. Fewer than 900 880 survive in the wild on the entire planet – and their only home is the Virunga mountains.

The trek begins through fields of wheat, white pyrethrum flowers, Irish potatoes and eucalyptus trees with farmers tilling to their crops and morning greetings. At the edge of the farmers’ fields, we hop over a stone wall that is the boundary between the farms and the forests of the gorillas.

The search is on. The mountain path narrows, gets dense and steep with fat forest trees, scrub, stinging nettle and tall bamboo fronds. Hours stretch to three. Panting for breath, Boniface Nzanzabandi my porter takes my hand to help with the steep incline up to a crater in the midst of the mountain. The gorilla trekkers are in there with the gorillas. An hour later, Rwambibi Leonard a gorilla tracker surfaces from the dense forest crater to guide us down and on the crater floor, stopping to catch my breath, there’s a faint rustle in the bush.

And l’m looking at a Mountain gorilla emerge from the dense forest. In that one moment, everything stops for me. It’s just me and the great ape.

“He’s 27 years old and weighs almost 200 kilograms,” tells Bahizi Edward the Rwanda Development Board tourist guide. The Silverback (adult males have white hair on their back and hence the name), is half my age and four times my size. Our eyes meet and l think, this is all that is left of his world – and l want it safe for him as l want for our children and generations to follow. His name is Gahinga.

The rest of the family follows, black flurry creatures on all fours – playful teenagers, infants and adults. Before the trek we’ve been advised not to talk, to keep a distance of a few feet, not to touch them or interfere with them and if the gorilla comes towards you in a mock charge not to run but to crouch in a ball.

For an hour we watch mesmerized as little gorillas climb and swing playfully from forest vines, teenagers chase each other, roll around and thump their chests while Neserwa the female nurses her three-month-old infant named Mafubo meaning someone who has an excellent character at the 12th Kwita Izina gorilla baby naming ceremony the day after on 2nd September at Kinigi. The Silverback sits, chews a stalk and lumbers away. It’s hide and seek as the troop appears and disappears in the jungle.

Then the Silverback thumps his chest and ambles across the grass patch. We watch him. For some reason he changes his mind and diverts a little. The six in our group step aside quickly. Maya and l are slow. He ambles towards us and with a little nudge of his bum, topples us over and walks away as the guards help us up.

The hour’s over before we know it and we’re ushered out of the crater and down the volcano to a world out of reach for the great apes.

Rwanda gorilla conservation is a success story. From 400 surviving 40 years ago, there are 880 and growing today. The government’s goal is to have it off the Critically Endangered list that’s one step away from extinction in the near future. At the 12th Kwita Izina ceremony 22 baby gorillas were named.

Flights to Rwanda are affordable but save up for the gorilla permit which is USD 750 per person non-refundable. Read more on http://www.rdb.rw

Rwanda is a tiny, mountainous country at 26,337.6 square kilometers compared to Kenya’s 581309.9 square kilometres. The infrastructure is fantastic, no plastic trash in sight. 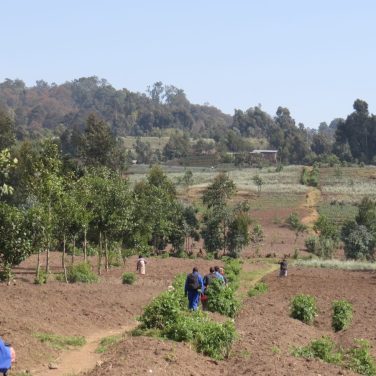